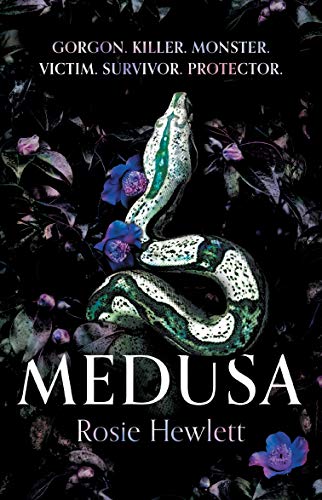 I think I should first start off by saying hello! I know its been awhile since I have written a blog post, but this has been an unexpectedly busy season of my life and I didn’t want to force anything just for the sake of posting. But with that being said, Medusa was a book that I not only enjoyed, but I knew I would have more to say than what an Instagram caption allows so I thought it was the perfect “first post back”. Plus to be completely honest it was the first time in awhile I felt inspired to write. So thank you Medusa for getting me out of both my reading and writing slump🖤

I have mentioned this before, but I am someone who is obsessed with history, more specifically greek mythology. I feel like the last couple of years specifically have been great in terms of modern day greek mythology retellings. While I must admit I am a sucker for a good love story that is typically found within these re-tellings, part of me (probably the single part haha sort of craved a retelling without a main plot focus being a relationship or the dependency of a character on anyone other than themselves) I also really wanted to see a retelling of Medusa’s story written by an author that wanted to actually tell the whole story and not just the story that fit a certain villainous narrative, and let me tell you, Rosie Hewlett delivered from page one. I have touched on how much I love morally grey or misunderstood characters in the past, but I think there is something about Medusa that almost makes her to some degree universal to anyone who has been a victim in their lifetime that has been made out to be a villain because of the way others choose to tell a story that is not their own, but refuse to stop to listen.

Looking beyond the obvious themes in the story, I want to take a moment to talk about the broader more underlying themes as well. A lot of times there is a question asked about why learning history is important, which to be honest as someone who loves history enough to minor in it in college hurts my heart a little. But beyond my personal feelings in the matter, I have always sort have agreed with that sentiment, but not for reasons you might assume. The reason why I think that this is an important question to raise is because in all honesty I think many of the versions of history that are commonly taught aren’t widely beneficial because they are typically watered down narratives with extreme biases that are meant to make one side of the story look innocent or like heroes while the other side is painted to either look like the victim needing to be saved, or the villain needing to be defeated. There is also the inherent problem of classism, racism, sexism, colonization, greed, so on and so forth but at this point I am digressing from the focus. I say this all to honestly commend the author for shedding light on the theme that “history” a lot of times is dependent on who is being listened to, and more often than not it is not a female telling the story, and it certainly is not a victim. I also really appreciated the fact that she told this story in a way that felt vulnerable and truthful, as Medusa wasn’t painted to be completely good or simply misunderstood, but rather a complex character who was clearly tired of their story being told by others who only knew or were interested in knowing half truths.

I think that it is also important to note that there is sort of a communal experience that also takes place in this story, and that is people will see you the way that they want to see you, and for reasons beyond your control. Just as there are things that happen to you in your lifetime that are out of your control as well. The world is filled with people that aren’t willing to take the time to listen, just like it’s filled with people that use their power to inflict pain on those they view as inferior or theirs for the taking. This book does an eloquent job of not only shedding light on this, but reaffirming throughout the book that while you have your own individual power, sometimes things happen that are beyond your control and for reasons that may never become apparent.

Overall I urge everyone to read this book. I think that while it is an enjoyable it is also so much more than that. I truly think that a wide range of people would enjoy reading this, but I especially encourage those that have felt voiceless, misunderstood, or (after considering potential triggers) victims of sexual assault to read this as I truly think that tThe book itself is just around 200 pages, and while I selfishly wish it was longer, I also really loved how the author chose to end the story.

A few standout quotes(but not all of them because I seriously want others to read the book and discover some for themselves):

“In general, I find that most monsters are made, not born. Perhaps you should remember that next time you encounter one.”

“I watch, outraged yet not entirely surprised, as the same tragedy echoes throughout generations, leaving an endless trail of broken victims and unscathed perpetrators.”


“I also often wonder how different my life would have been if I were born a man. Would Athena have protected me then? Would Poseidon have respected me? I claimed earlier that beauty was my first curse, but perhaps it was actually being born a woman.”

I think it is clear that I loved this book. I just think the manner in which the author told this story was brilliant. I can tell you with 100% certainty Rosie Hewlett will without a doubt be an auto buy author for me from now on.

Please let me know your thoughts if you’ve read!! This was a long post, but I thought it was fitting considering I haven’t rambled on here in awhile🖤📚

Hi! My name is Nolani and I am so excited you are on my Blog! I also have an Instagram @ReadandRamble if you would also like to be friends there! I am a lover of all things book related- if you have any suggestions for me to read I would love to add them to my list! I made a resolution in 2021 to follow my passion and hopefully build a community of book lovers. I also hope to read at least 100 books this year, so let's see if I can make that happen! I would love for this page to be a place where I share books, reviews, and where I can make life long book loving friends. Feel free to message me, as I am sure you can tell my my Blog's name, I sure love to ramble! View more posts

One thought on “Medusa”